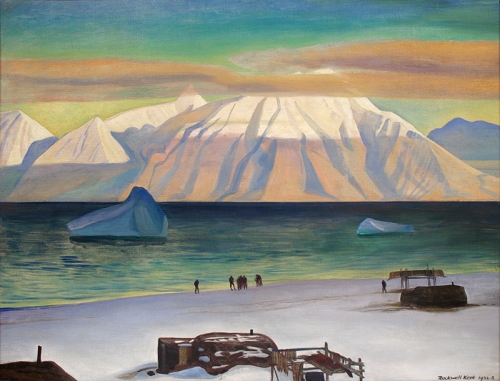 On June 21, 1882, Rockwell Kent was born in Tarrytown Heights, NY to Sara Ann Holgate and Rockwell Kent, Sr. Born into a privileged family, the young Kent attended several of the East Coast’s top private schools. When he was 13, he toured Europe with his aunt Josie Baker, who was a well-educated artist.

In 1900, he began his art training at the William Merritt Chase Summer School of Art in Shinnecock, Long Island. In the fall, he enrolled in the architecture program at Columbia University. Just prior to his senior year, he dropped out and enrolled fulltime at the New York School of Art, where he studied under painter Robert Henri (1865-1929).

Following in the footsteps of his mentor, Kent took a painting trip to Monhegan Island, ME in 1905. The island’s vibrant working class attitude and arts community had a lasting effect on Kent. In the following April, he returned to Monhegan and purchased some land. While living there, Kent met his first wife, Kathleen Whiting, a niece of painter Abbott Handerson Thayer (1849-1921). Over the course of the next 13 years, the couple had five children together until their divorce in 1925. Kent married again in 1926 to Frances Lee Higgins, and once more in 1940 to Shirley (“Sally”) Johnstone.

In 1911, he moved to New York with his family and resumed work as an architectural draftsman. He also exhibited fifteen paintings and twenty-four drawings at the Gallery of the Society of Beaux-Architects, New York. In 1914, Kent made his first trip to Newfoundland with his family. There, he worked on a series of paintings and drawings of the area until the summer of 1915.

As World War I waged on, the Kents returned to New York and purchased a home on Staten Island. Kent began to regularly submit cartoons to various magazines, such as Harper’s Weekly and Vanity Fair. His drawings were published under the pseudonym “Hogarth, Jr.” and often satirized popular culture and politics. Throughout the 1920s and 1930s, Kent made several trips to Alaska, Tierra del Fuego, Greenland, and Copenhagen. Upon each return, he published visionary memoirs and illustrations of his travels to “exotic” lands. Some of his published works include Wilderness: A Journey of Quiet Adventure in Alaksa, Voyaging Southwards from the Strait of Magellan, Salamina and N by E.

During the years leading up to and for the duration of World War II, Kent dedicated much of his time to politics and workers’ rights. Coinciding with these beliefs, he contributed letters to the American Marxist publication The New Masses (1926-1948). Over the next several years, Kent’s political efforts were met with much disdain from the U.S. government. In 1939, he denied charges that he was a member of the Communist party before the McCarthyesque hearings of the House Un-American Activities Committee. Despite his testimony, officials kept a close watch on Kent, ultimately revoking his passport to travel abroad in 1950. Kent appeared before the Permanent Investigations Subcommittee once more in 1953, finally regaining his passport in 1958. In that same year, Kent wrote This is My Own— an account of his confrontations with the U.S. government.

In his later years, Kent traveled around Europe and visited the Soviet Union with his third wife Shirley (“Sally”) Johnstone. He donated a large portion of his personal collection and paintings to the people of the Soviet Union for which he was later awarded the Lenin Peace Prize in 1967. In 1971, Rockwell Kent died at the age of 88 in Plattsburgh, NY.

Rockwell Kent was a free spirited artist and a reverent worshipper of the wilderness. Transcendentalist writings by Ralph Waldo Emerson, Henry David Thoreau and Walt Whitman provided thematic ideologies for his works, while his various trips to Alaska, Newfoundland, Greenland, and Tierra del Fuego further provided the material that Kent used to become one of the most influential American painters and illustrators of the early 20th century.

During his years as a student in New York, he was exposed to the works of his contemporaries George Bellows (1882-1925), Man Ray (1890-1976), and Marguerite (1887-1968) and William Zorach (1887-1966). Once in Newfoundland, he began to work in the style of the Symbolists. Though Kent adhered to many of the philosophies of New York’s circle of avant-garde artists, his style never strayed far from that of the Symbolists or German Expressionists. His paintings often include strong lines and figural imagery, most likely derived from his background in architecture.

A deep sense of spirituality is present in many of his paintings. In his Greenland series of the 1920s and 1930s, imaginary beings are placed in idyllic landscapes. Kent often reclaimed this basic compositional arrangement for many of the government commissioned murals he executed and for his work in print advertising (Wien 109). Furthermore, his brush and India ink drawings portray close similarities to the relief etchings of the late 18th and early 19th-century British artist William Blake. As in many of Blake’s illustrations, Kent’s numerous designs often suggest the intricate relationship between the universe, mankind, and the Divine (Wien 51). In paintings such as The Fire Bird (1927), a monumental-sized cherubim-like figure radiates in the heavens above a seaside coast, while a god-like figure hovers over a small church in the painting Russian Mass (1928).

Kent’s career is often compared to that of his contemporary Marsden Hartley’s as both artists were also published writers and often painted works filled with philosophical and spiritual concerns (Wien 48). Coincidently, they also struggled at times to find a place in society. Hartley never quite fit in due to his homosexuality, while Kent fell out of favor because of his associations with pro-Communist organizations.

Closer to the end of his life, the US establishment’s failure to accept Kent’s personal ideologies only grew more intense, ultimately leading to a lack of support for his art. As a result, Kent donated over forty of his own paintings to public collections in Russia, the Ukraine, and Armenia (Wien 79). Today, Kent is best remembered for his position as a top book illustrator during the 1920s and 1930s. Some of his most triumphal masterpieces include illustrations for Herman Melville’s Moby Dick, Voltaire’s Candide, Shakespeare’s Venus and Adonis, and illustrations for his own manuscripts.

1911 Gallery of the Society of Beaux-Arts Architects, NY