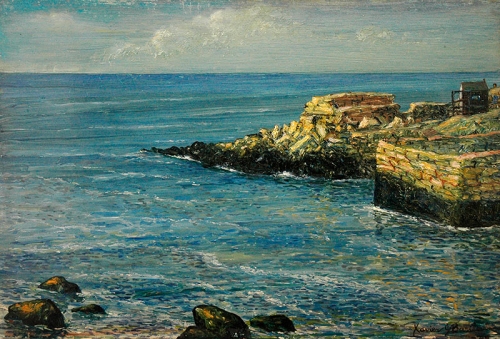 Xavier J. Barile was born March 18th, 1891 in Tufo, Italy. At age 16, his mother brought him, his two brothers and two sisters to Queens, New York, where they joined his father. Barile's early years were spent assisting his father in the family tailoring business. He learned English quickly and enrolled in evening art classes at Cooper Union. Barile worked as a cartoon illustrator for several papers and magazines to supplement his tuition. Soon after graduating Cooper Union, he began courses at the Art Students League, working under the instruction of prominent Ashcan artists such as John Sloan (1871- 1951), William de Leftwich Dodge (1867- 1935), Louis Mora (1874- 1940), and Victor Perard (1867- 1957). During this time, Barile also formed lasting relationships with social realists George Luks (1866- 1933), Everett Shinn (1876- 1953), and Robert Henri (1865- 1929).

Highly influenced by these artists, who are collectively known as "The Eight," Barile founded his own art school in 1919. The Barile Art School was primarily focused on teaching painting in oil, watercolor, and casein. Barile's school offered life, portrait, still life, composition, etching, and landscape classes in the summer.

Beginning in the ‘20s and into the ‘30s, Barile was an active member of the New York arts scene. He exhibited at the Whitney Studio Club, the Andersen Gallery, the Cincinnati Museum, and the Salmagundi Club. He served as secretary of the Italian American Arts Association. He was a member of The Dalais, a group of 12 painters who were joined in their common desire for each artist to express his vision of beauty as simply, clearly, and honestly as possible (Smithsonian Institution Archives). Barile's passion for the beauty in painting “truth” was clear. James Britton, editor of the Art Review International wrote, "As a portrait painter, Mr. Barile's fine sympathy and insight enable him to reveal human character in as favorable a light as a desire to reach the truth permits.”

During the depression, Barile worked for the WPA. He worked under longtime friend Reginald Marsh (1898- 1954) painting the murals of the U.S. Customs House on Bowling Green, New York. Barile and his colleagues spent hours observing and sketching the bustling activity of the New York waterfront in preparation for the massive project.

In 1946, he left Colorado to teach at The Arts Club in St. Augustine, FL, and eventually returned to New York to continue working, teaching, and exhibiting. He traveled all across the United States to paint, capturing images of the Southwest, California, Texas, Kansas, New Orleans, and New England. During his lifetime, Barile taught mainly at the Barile Fine Arts Group and organized painting excursions to exotic locales, including Mexico and Italy.

In 1961, he married his student Lolita de Silva, a young Mexican artist. The marriage ended 18 years later when de Silva suffered nervous breakdowns and was taken back to Mexico by her family. Barile died two years later at age 90.

At the time of his death, Barile's work was widely praised by critics. In reference to one of his works, Dr. Vernon Hall remarked the "painting has entrapped for me the momentary grace, the fleeting glance on rose translucent flesh of light, and made it live for an eternity. No matter how the ravages of chance and time impair the transitory sight, here on your canvas it will always be” (Smithsonian Institution Archives).

Xavier Barile’s early work was influenced by the Ashcan School, an urban realist movement that lasted from 1897 to 1917. The group initially derived its name from a critic who scorned their movement’s progressive approach and intended the term as a derogatory moniker. The artists, however, appreciated this irony, and the Ashcan School is now a highly respected group in art history. Ashcan artists painted gritty views of city life and believed art was responsive to the issues of urbanization. They focused on progressive subject matter, using explosive, passionate language to describe the link between their art and political affiliations (Meklenburg 1995).

Prominent Ashcan artists George Luks, John Sloan, and William Glackens mentored Barile while he studied at Cooper Union and the Art Students League. John Sloan dedicated his book “The Gist of Art” to Barile, writing, “to my old friend, first monitor of my first class at the Art Students League in 1914.” Upon completion of his studies, Barile, like Sloan, worked as a newspaper illustrator, using bold images as commentary on important sociopolitical events.

Barile’s oil on canvas Winter Scene from my Window (1947) is comparable to George Bellows New York (1911). These paintings, as with many works from the Ashcan School, depict bustling public spaces on a typical city day. Strangers pass one another on city streets, and although New York is much larger in scale and focus, both attempt to capture the atmosphere of the city’s dense social culture.

Never one to exaggerate form or color, Barile was interested in exploring subtle changes of line and shade. Art critic Walter Pulitzer mentions the artist’s quiet mastery of technique and color, writing, “Mr. Barile does not belong to the pretentious flamboyant school who find it impossible to tell their story or express their genius except in large canvasses” (Art Notes, Smithsonian Archives).

His love of subtle beauty is most apparent in his strongest genre, portraiture. The modern realist style and technical excellence he employed gave rise to haunting images. Lucretia (ca 1950), for example, features a stark concrete gray background set amongst shadows. He manages to create a sense of luscious femininity by incorporating brief touches of pink into the otherwise somber setting. Like Lucretia, many of Barile’s subjects are clean and planar, stylistically similar to the work of Edward Hopper.

A constant observer, his sketchbooks were filled with evidence of his eternal quest to pictorially capture the essence of a situation. He sketched during board meetings, on ferry rides, and while sitting on park benches. City and landscapes were also a part of Barile’s expertise, and he often taught classes en plein air. “Only out of doors can one learn the science of color in it’s fullest significance,” he wrote in an art bulletin (Smithsonian Archives).

Barile’s technical brilliance is dramatically clear in his landscapes. New Orleans, LA Shore (ca 1941) is classically composed with opposing lines of objects to heighten dramatic tension. The realistic shadows and details on the enormous clouds could only be painted from years of practice and observation. The painting has a quiet sense of timeless wisdom and peace, a feeling accentuated by the heavy, weather beaten wood pilings that seem to groan under their own weight in the foreground.

The artist dedicated most of his life to using his mastery of observation and technique to instruct others. He enjoyed teaching, and inspired many students over his almost 70 years as an educator. John Sloan recommended him to his most prestigious post, that of founder and art director of the Pueblo Junior College Fine Arts department in Pueblo, Colorado. Barile garnered publicity and interest in the department, and “under his guidance, the department developed into an outstanding asset in the community” (PJC History). Besides bringing national exhibitions and contemporary knowledge to the department, Barile was an entertaining teacher. He frequently gave live demonstrations of portraiture and monotype, which were both well attended and effective in attracting publicity for Barile and the college.

Over the span of fifty years, Xavier Barile’s critically acclaimed artistic expressions evolved from progressive sociopolitical commentary into sophisticated explorations of the grace and subtlety of landscapes and the human form. His technical skill and infectious enthusiasm for painting real life scenes brought a unique sense of precision to his modernist work.