Sullivan Goss – An American Gallery is pleased to present NELL BROOKER MAYHEW: Delicate Resilience, a new exhibition of early twentieth century paintings on paper and canvas from the Estate of the Artist. Held in dark closets by the artist’s daughters and now in the gallery’s vaults, most of the works in the exhibition haven’t been shown in almost a hundred years and retain an astonishing freshness. Mayhew blends influences from French Symbolism and Impressionism, and Japanese woodblocks (ukiyo-e) with Arts and Crafts techniques and an Art Nouveau sensibility to produce her unique perspective of Southern California. Her lyrical lines and effervescent subject matter bring an ebullient feeling of what it truly means to rest in nature—to see the colors of the wind and the dancing of trees and flowers.

Nell Brooker Mayhew’s color etchings, which she called “paintings on paper,” enchant collectors as much today as they did over a century ago, when the artist first began to produce them at the University of Illinois at Urbana Champaign. Working under Newton Wells – who had trained under Edgar Degas – Mayhew patented the color etching, a monotype created over an etching. Monotypes are created by painting directly onto a printing plate made of zinc, copper or glass and pressing the plate to paper. While an etching is part of a reproduction process, monotypes are essentially paintings made on a press. They are not reproducible. This innovative process allowed Mayhew to efficiently produce a fairly large number of unique works, satisfying her need to bring the spiritual and educational value of art to the masses.

Born in Astoria, IL in 1875, Mayhew studied at the Art Institute of Chicago as well as Northwestern University. In 1908, she moved to Southern California where her distinctive and avant approach gained her a number of exhibitions with glowing reviews. Mayhew was sufficiently well established and well regarded that she exhibited alongside such major Southern California artists as Hanson Puthuff, Elmer Wachtel, and Edgar Payne. Later, she landed a position as an adjunct Professor of Art at USC. In her last decade, she owned her own gallery in Los Angeles. In the last couple of years, Mayhew’s contributions have been recognized in Lyn Kienholz’ L.A. RISING, the Illinois Historic Preservation Agency’s Historic Illinois and by the Illinois Women Artist’s Project. 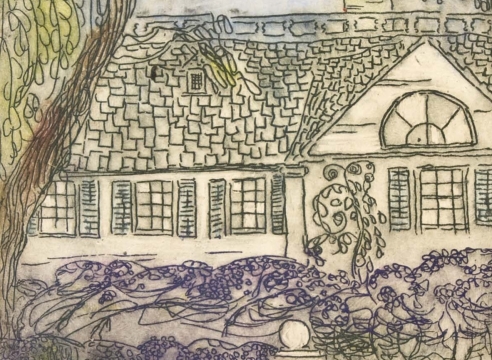 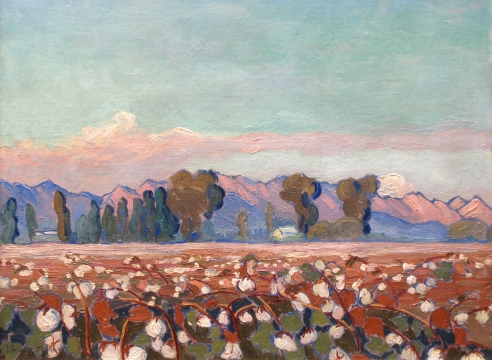