Sullivan Goss – An American Gallery presents RICHARD HAINES: SUBDIVIDING THE SPACE, a sweeping exhibition of paintings by WPA Muralist and later West Coast Modernist, Richard Haines. Comprising the artist’s experiments with Precisionism in the 1930s and advancing through his “reticulated” style of the late 1940s and 50s into a broader brushed Cubism and abstraction in the 60s, SUBDIVIDING THE SPACE will provide a new perspective on the dense compositional sensibility of one of the West Coast’s most prominent modern art teachers. Alluding perhaps to the parched earth of the deserts around Los Angeles, to the fault lines running beneath the state, or to the mania for subdivided suburban development, Haines’ reticulated paintings were widely admired and even copied. This exhibition will present them in the context of his aesthetic journey – showing works both before and after these paintings came into fashion.

Born in Marion, Iowa in 1906, Richard Haines went to work in commercial art making woodblocks right out of high school. Having earned his living in the arts for a while, he decided to pursue more formal education at the Minneapolis School of Art, where he specialized in murals. Haines went on to become one of Minnesota’s most recognized names in mural painting. In fact, Grant Wood asked Haines to join him at one point, though the younger artist declined.

Haines ended up in California during World War II, where he got sidetracked on his way to Alaska to begin a mural commission. Instead, he took a class in camouflage design and worked in dye and pattern design for Douglas Aircraft. All of his technical training eventually came to bear on his fine art. His aesthetic sensibility was writ large in numerous murals throughout Los Angeles and across the country. His style also made its way into the curriculum he created as a professor at both Chouinard and Otis Art Institutes. Sullivan Goss has represented the Haines Estate for a number of years and looks forward to a reappraisal of the era and its artists through such ventures as the Getty Museum’s PACIFIC STANDARD TIME project. 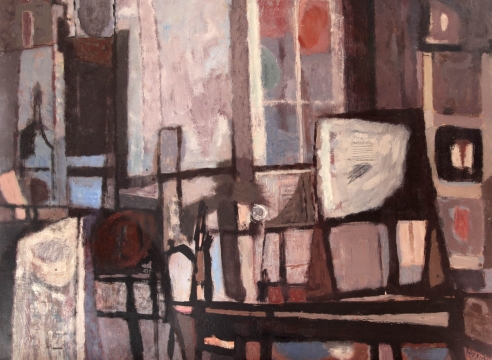 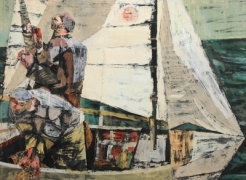