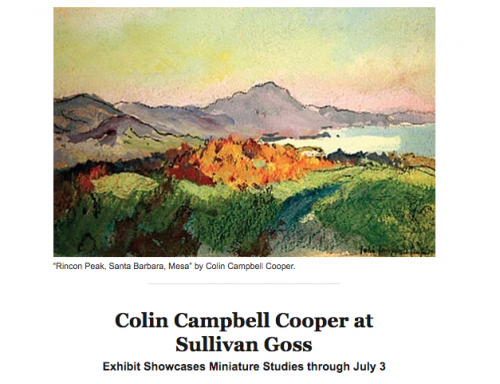 He was a leading figure of American Impressionism, known for his architectural paintings and those documenting his travels to “the Orient.” By the time Colin Campbell Cooper settled in Santa Barbara in 1921, he had established himself as a prominent artist of his era.

Better known on the East Coast for much of the 20th century, Cooper had a bit of a West Coast renaissance in the 1970s, when a number of his works were discovered in the basement of Santa Barbara City Hall, renovated, and put on display. Then, just more than 10 years ago, Sullivan Goss acquired the artist’s estate from his descendents. Now, for the first time, the downtown gallery is displaying nearly 80 of Cooper’s small-scale studies. These are not the monumental, formal paintings for which Cooper is best known. Instead, these works show the artist at his most instinctive. Painted primarily in water-based gouache and measuring no larger than four by seven inches, these tiny images display a looseness and freedom that didn’t often translate into the finished versions.

The show is titled Stills from a Life’s Cinema, but these miniature paintings are less cinematic than diaristic. Each one is a distinct, self-contained record: a witnessing of light on water, or of shifting cloud formations. One day, it’s a bustling African marketplace that captures the artist’s imagination; another day it’s the graceful arc of a swan’s neck, or the attenuated colors of twilight over a mountain range.

There’s always a thrill in seeing inside an artist’s process—think of Picasso’s sketches, or Rembrandt’s—and yet the delight of these works is about more than simply peeking behind the studio door. These tiny paintings are fresh and exciting in their own right. The artist’s enthusiasm radiates through them as surely as they seem to glow with sunset hues. Here, more than in any of the polished works most consider his masterpieces, is evidence of the joy Cooper found in his subjects.

In “Tunis Street Scene with Figures,” a vibrant marketplace seems full of heat and movement, round domes and whitewashed walls framing a square where figures huddle in conversation. Like a postcard home, it’s a quick study that captures the essence of place. Many of these works appear almost to be lit from within. Among them is “Sunset with Rays over the Ocean,” which, despite its size, evokes a vast seascape, glittering with reflected light. It’s easy to picture the artist at his easel, his face glowing orange with the sinking sun as he eagerly mixes his paints. “Sunset over Green Sea” is nearly abstract in its evocation of a late evening sky, bruised purple and gray, while “Rincon Peak, Santa Barbara, Mesa” offers a familiar view of our sweeping coastline, and a reminder that Cooper’s extraordinary legacy is forever tied to this landscape.