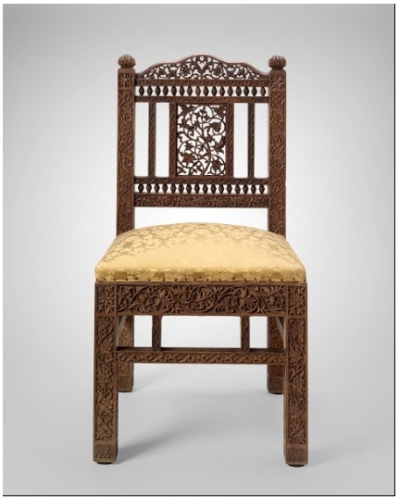 “I always hear people say that in the design for any chair or garment, the inside is just as good as the outside. The idea is to make the experience as immersive, engaging and fresh as possible,” says Divya Thakur of her intentions with her latest curatorial feat—expanding the Museum of Design Excellence (MoDE) to a digital and consequently, global landscape—made possible due to a partnership between the Museum and Google. “Brick-and-mortar museums usually think to convert physical aspects into digital. We are creating exhibits only for the digital platform…something that is tailor-made for the virtual world.”

“The registration for MoDE came through on the fourth of October last year,” she tells us, evidently still upset about having so closely missed sharing its birthdate with Gandhi’s. The not-for-profit scion of Mumbai-based studio Design Temple (also founded by Thakur) currently houses over 200 artefacts in its online repository, a few of which have made their way into the award-winning design practitioner’s personalised list of recommendations for AD. Featuring everything from chairs, seats, and footstools to influences of Bauhaus on art, architecture and design in India, her suggested exhibits ought to be, according to the Press Note, “some of the most important items of the launch.”

MoDE became the only Asian outfit invited to participate in “Bauhaus Everywhere”, a world retrospective by Google Arts & Culture, in collaboration with The Bauhaus Dessau Foundation. Chronicling traces of the 100-year-old design school in India had been a mammoth albeit riveting task. “It’s been deliriously exciting to go through different materials, and learn something completely new,” she says of the illuminating journey that started entirely from scratch and ended with a launch in Berlin towards the end of last year.

Her suggestions from the Bauhaus collections follow the “first generation of India’s Modernist Architects”, the likes of Achyut Kanvinde and Habib Rahman; cover artists that exhibited at the unprecedented exchange of ideas between Europe and India in 1922 at ‘Bauhaus in Calcutta’; and examine the archetypal Godrej CH4 Chair, created contemporaneously to Marcel Breuer’s Bauhaus style tubular chairs, which she writes, “made Godrej the country’s foremost company to deploy mass production for designing modernist workspaces in the country.”

Beyond The Throne: The Untold Story of India’s Seats and Chairs

“It is widely misunderstood that India didn’t have forms of seating…that we acquired it only from the British. I’ve tried to go back in time and show the kinds of seating we did have and it’s not like there wasn’t anything else besides the throne. Hence the title,” says Thakur. A deeper dive into the exhibit will tell you of  India’s decisive role in catalysing the Aesthetic movement in America, devising a new hybrid style of ornamental furniture, and even shaping the kind of Modernism that lays equal emphasis on hand and machine.

“Imagine everything we can do with Google Arts & Culture. We can syndicate assets that belong to India or were Indian at some point in time but now sit with museums all over,” she says, briskly expressing her delight at the expanse of assets, artefacts, and technological marvels that are now at her disposal thanks to the platform’s archives and digital loans’ feature. One particularly noteworthy outcome of this virtual cross-connectedness has been the syndication of the ‘Throne and Footstool’ carved by craftsmen from Travancore—the “centre-piece of the Indian Section at the Great Exhibition in 1851…presented to Queen Victoria”.

“All we’re trying to do with this museum is claim our history and stake a claim on our past as well as our present,” says Thakur who hopes for MoDE to become an uncontested repository of the Indian Subcontinent’s routinely glossed over cross-cultural design prowess, and in the process, lend its colourful contributions their rightful place among other key influencers of the global design ethos. It’s a noble effort otherwise made effortless by Google Arts & Culture—“that’s the other reason it’s been wonderful partnering with them. They’ve perfected the tool. You’ve got a larger audience and a permanent archive…something you can refer to whenever you’d like. The exhibition doesn’t end.”