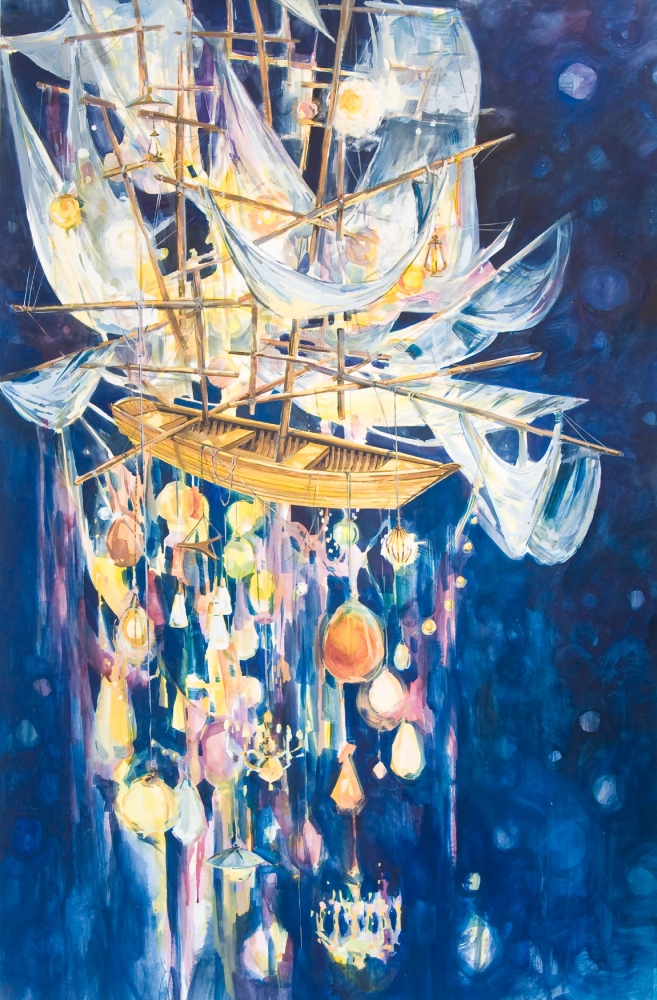 (TRANSLATED FROM THE ORIGINAL FRENCH via Google Translate and the writer's wife, Sylvie)

Nathan Huff's exhibition at the Sullivan Goss Gallery, Santa Barbara, which runs until 2019 September 24, is titled The Stories We Tell Ourselves. The young Californian artist relies for his visual creations on elements spotted in nature and around him. In this exhibition are gathered works that include certain realities belonging to the plant world (trees, plants but no animals this time) to which are added representations in a reduced model of things produced by man (boats, ladders, etc.). as well as usual household goods. His paintings can glow at a glance but also ask the viewer to linger to consider various particular details. They remain identifiable but often seem strange either by their own shape (trees with gnarled branches) or because of an unexpected situation (the cloud rains on the chair, the plants in jars levitate).

The artist's spirit manifests its singularity as much by the material production of objects in two or three dimensions as by its choice of ordering forms that often acquire a dreamlike dimension. Some figures are recurrent creations of the artist : the ladder, the canoe or the boat, the tree, the starry sky, etc. ; they find themselves in the work of Nathan Huff for several years, each time put in different situations.
Faced with the paintings as in front of the volumic installations of the artist, the visual journey of the visitor does not allow him to distinguish completely what belongs to the realities recognizable by all and what comes from the arbitrary choice of the artist for unexpected connections of the represented elements. One of the peculiarities of these creations, as well for the paintings as for the sculptures-installations, is the mixed between continuous and discontinuous. The space between things is as important as the objects themselves. It is in this intermediate space that there is a recurrent form, the often luminous punctuation of "dots". These can be interpreted as figurative evocations of lamps (here called Lumens) or stars (present in Myrtilocrest Moment, Tree Aloe Transience) but also constitute a decorative figure that art historians or French critics call "le semis ". One could translate this term by sowing or seedlings. The term emphasizes the distribution, which for artists and peasants is generally irregular whereas in polka dots fabrics peas are aligned. These punctuations can be interpreted figuratively but above all they are an abstract animation of the painting backgrounds. Their all-over distribution constitutes a counterpoint to centered figurative representations and they contribute to the evocation of the floating world that marks Nathan Huff's paintings. Beside the circuit made by the eye of the viewer moving from an evocation of figurative objects to another, the artist proposes another path, more free, between these dots. After sowing the seeds of a visual journey, the visitor can circulate in the painting starting from any point and improvising each time a new circuit. We will notice the interesting presence of a seedling in the representation of a pillow at the bottom of the pile that comes to cap a tree branch : an abstract and feminine world at the base of an erectile column, there would be a lot of stories to tell ...

Nathan Huff has his own style to describe the world, he has a way to transform things, to keep only what is important to him to organize original associations. He manages to share artistic feelings through small touches that are both personal to the artist but can be felt by many visitors.

The simplifications, diversions and transformations that it operates do not come out of the field of ornament but rather than an alternative truth. The branches of trees (Rorschach 1,2) beyond the accumulation of brushstrokes that constitute them come to form nodes without leaning towards the decorative.

All his works develop a subtle sense of matter which is never heavy but which, by an intuitive and felt physics, manages to mix the solid, the liquid and the gas. These different sensations come as much from the objects represented as from the distribution of shapes in the plastic space or the technique of creation used. In these paintings, the artist proceeds with a multitude of small watercolors that find their counterpart in voluminal assemblages with thin wooden sticks that cling to a larger structure, like this piece of dead wood, in the work entitled Rigging.

We can recognize the gaseous appearance as well as the luminous representations : bulbs, chandeliers or stars, but also the clouds that drop their parsimonious rain on the plants in Some Mornings or Some Nights. Pillows that seem as swollen with air as feathers will also be classified as gaseous. They float in the air (Tree Aloe Transience) when they are not held in a branch form, Some Mornings (?). These painted pillows are reminiscent of the volume ones featured in the Bed Room installation at the Sadness Sleep and Sanctity exhibition at New Media Gallery, Ventura College, 2017 ; their assembly then ended up constituting a kind of tree dominating the empty bed.

In Nathan Huff's paintings, the liquid element is everywhere as well as a constituent of the gouache or watercolor pictorial material but also as an element of the figurations. As we have seen, rain is sometimes figured and the paint flows naturally due to gravity. But especially the blue background of large paintings is both a night sky and a marine universe that supports the representations of boats. In voluminal creations where boats or miniature canoes are often present, it is by its absence that the liquid medium is recalled : the boats fly away and cling to the branches after the disappearance of the liquid medium ; we do not know if it is a vision after the flood, following a storm or the consequence of the falling sea level.

The solid bodies affirm their presence by gravity, chairs rest on their four feet, the trees are anchored in the planks, in their consequent pots the plants flourish. But it is of course in the sculptures that the solid presence is expressed. The most expressive element is in this case the metal chain whose gravity, now solidified, serves as a base for the ladder and canoe in Climbing, 2019.

All these creations remind us that in art it is the imagination that makes reality.

These paintings or installations each relate to a project, with stories specific to the work itself, but moving between the works the visitor perceives the possible links with different connotations of what he expected to find. After having remained a moment in front of these bi or three-dimensional representations, the visitor feels the heavy presence of his body among these other bodies since he can not free himself from the suspension of gravity that reigns in the universe of the artist. Yes we are matter and if we can not free ourselves from this constraint we can however in front of works like these to feel by our various senses of the physical and / or psychic pleasures. The stories that Nathan Huff tells us are great for awakening our sensuality and allowing us to rock into dreams for a moment.