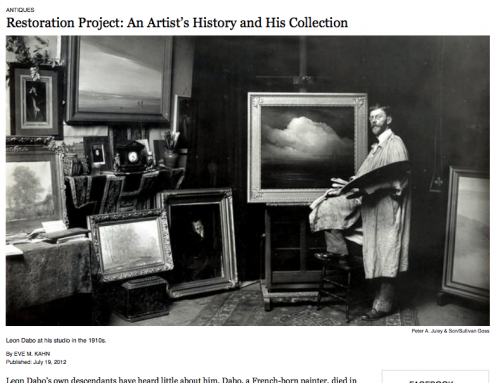 Leon Dabo’s own descendants have heard little about him. Dabo, a French-born painter, died in 1960, at 96, after a restless career living in and around New York and in Europe and exhibiting in hundreds of group and solo shows. His early subjects were saints, and later he favored twilit riverbanks, battlefields, bouquets and eerie pastures striped with dead trees.

Dabo ended up estranged from his family, and he has largely fallen off the radar of art historians. Albert Douglas, 91, Dabo’s only grandson, told art dealers during a recent filmed interview that he hardly knew his grandfather. He does remember a debonair gentleman fond of expensive liqueurs and chronically short of cash who could “paint like a stream.”

“He’s turning out to be a man of parts, many parts,” Mr. Douglas told the interviewers, as they filled him in on episodes in Dabo’s life on the run from Nazis and in breakthrough shows alongside names like Kandinsky and Matisse.

The dealers who filmed the conversation, Frank Goss, Paul J. Gallagher and Ronald A. Knox, are now collaborating on publications, shows and Web postings to bring Dabo back into the limelight.

A few years ago Mr. Gallagher and Mr. Knox, who own Stillwell House Antiques in Manalapan, N.J., discovered hundreds of Dabo paintings and drawings, along with tools and materials, in storage in upstate New York. A few months ago Mr. Goss bought the trove for a sum he describes as “serious seven figures,” to study and sell at his gallery, Sullivan Goss, in Santa Barbara, Calif.

Dabo’s original last name was Schott; family members apparently renamed themselves after their French hometown, Dabo, upon resettling in Detroit. Leon’s father, Ignace, was an ecclesiastical muralist, and in the 1880s Leon moved to New York as a teenager to help support the family by painting church and synagogue murals. He found an elite mentor, the artist and stained-glass designer John LaFarge, and then somehow financed travel and art lessons in Europe with Whistler’s avant-garde circle.

In 1889 Dabo married a British woman, Marie Jennie Ford, but by the early 1900s his adulterous ways seem to have driven them apart. “She tossed him out of their house with only his brushes in his hand,” or so legend has it, Mr. Goss wrote in an e-mail.

Dabo’s daughter, Madeleine, largely cut him out of her life. His son, George, committed suicide in 1910, at 17; he shot himself in the head after investing in the New York Stock Exchange and morosely obsessing over fluctuations in his net worth.

Dabo and his second wife, Stephanie Ofental, a translator from Warsaw who was Jewish, ended up in Paris just before World War II. The couple managed to escape persecution and return to New York, with a few hundred artworks in tow.

“He ran for his life with his Jewish wife, and with this painting,” Mr. Knox said, holding up a slightly torn 1930s picture of a bouquet during a recent tour of the Stillwell House collection.

In Dabo’s seven-decade career he hobnobbed with celebrities like Marc Chagall and George Bernard Shaw. At the 1913 Armory show in New York, Theodore Roosevelt admired Dabo’s scene of a Canadian snowfall. Helen Hay Whitney wrote a poem about the canvas’s “old lost stars to rise and gleam” and “secret, haunting theme.”

Major institutions including the Metropolitan Museum of Art, the Newark Museum and the Brooklyn Museum acquired his work. But he has had few shows since his death, partly because so many of his significant works and archival material were hidden away. Stephanie Ofental Dabo did donate some of his papers to institutions like the Smithsonian and the New York Public Library. But her collection of hundreds of paintings by her husband ended up bequeathed to a sister and then a succession of family friends, inaccessible to scholars.

Rumors of the collection’s survival did emerge in the art world, while the paintings were stacked to the ceiling at an upstate New York farmhouse. In 1999, D. Wigmore Fine Art in Manhattan brought out a few dozen pieces from the estate for a brief summer show. Mr. Gallagher and Mr. Knox eventually managed to persuade the upstate owner (who has requested anonymity) to relinquish it and then anxiously drove the truckloads of career legacy to New Jersey.

“We had chills the whole way,” Mr. Knox said.

They spent months photographing and cataloging and quietly spreading the news to dealers and scholars.

“We became crazy sentimental, like a family member, about protecting Dabo,” Mr. Gallagher said. Mr. Knox added, “We were always so hypercautious about not overexposing the estate.”

They called Mr. Goss, knowing that his gallery had handled estates for underappreciated 19th- and 20th-century innovators, like the Orientalist painter and designer Lockwood de Forest. Mr. Goss said in a phone interview that he was skeptical upon hearing about the Dabo bequest, since the art world is riddled with hype. Still, he added, something whispered to him that “this is a deal that might be real.”

He calculated his purchase offer partly based on healthy recent Dabo sales; in 2010, a lakefront twilight landscape brought $43,750 at Christie’s in New York, a public record for Dabo.

Sullivan Goss has already published a book about Dabo’s sketches, and a show of pastels with a catalog opens Aug. 2. Next year, Dabo drawings from the estate will be shown in the art gallery at Grand Valley State University in Allendale, Mich. Also for 2013 the New-York Historical Society is reassembling the contents of the 1913 Armory Show, where Dabo displayed his scenes of islands, riverbanks, storm clouds and the Canadian snowfall.

Sullivan Goss and Stillwell House, meanwhile, keep making discoveries. More descendants to interview have turned up, and there are countless religious murals to track down, mainly in and around New York. The leader of one decrepit house of worship in the region with dozens of Dabos — who requested anonymity to avoid attracting thieves — gave a tour one recent Sunday morning.

Canvases line the soaring, vaulted rooms stained by leaks in the roof. The portraits of dying and martyred saints need cleaning and repair, but scudding clouds and sunset streaks can still be made out in the backgrounds. “This must have been some church in its day,” the leader said.