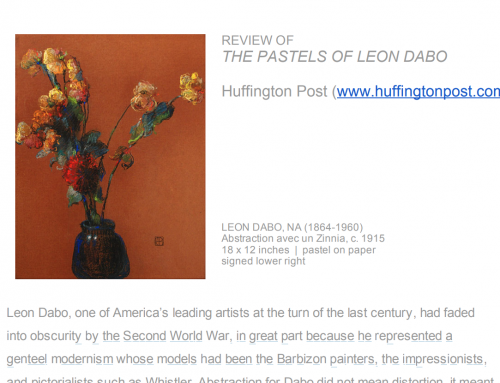 Leon Dabo, one of America’s leading artists at the turn of the last century, had faded into obscurity by the Second World War, in great part because he represented a genteel modernism whose models had been the Barbizon painters, the impressionists, and pictorialists such as Whistler. Abstraction for Dabo did not mean distortion, it meant the merest non-naturalistic stylization. A century past his heyday, however, we can appreciate Dabo’s gentle way with landscapes and still lifes, and in fact find certain radical things going on in them. A master of pastel equal to Degas or Redon, Dabo brought flower arrangements to startling life not by rendering them in trompe-l’oeil, but by describing them as stark, vivid presences in indistinct spaces, at once dramatically flattened and lovingly contoured and substantiated. Dabo captured nothing metaphysical in these flowers, but instead found in them a staggering spectrum of physicality, a tensile strength that supports rather than belies their delicacy, a coloristic variety that the eye grasps surprisingly slowly, a texture that can seem – feel – at once glossy and feathery. Such flower pictures comprise the bulk of this pastel show, but several of Dabo’s landscapes – which, like Monet’s late works, do verge on what we would consider abstraction – enhance the selection. - Peter Frank