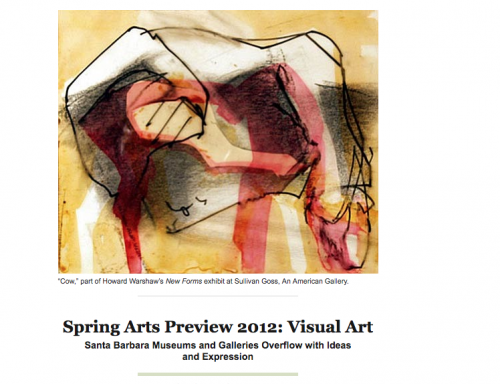 Howard Warshaw’s New Forms at Sullivan Goss – An American Gallery: “Cowboy Cubist” Howard Warshaw created some of the most dynamic and intriguing paintings and murals produced in California during the 20th century. An early (1957) addition to the UCSB fine arts faculty, Warshaw painted important murals in nearly all of the UC schools of his time, along with major works for the Santa Barbara Public Library and Bowdoin College in Maine. His fascinating equine and bovine paintings of the 1950s and 1960s are among the most lyrical cubist-influenced pictures ever painted in this country. New Forms offers a substantial selection of work from both the paintings and the murals. Through Sunday, June 3. Call 730-1460 or visit sullivangoss.com.

Carefree California: Cliff May and the Romance of the Ranch House at UCSB’s Art, Design & Architecture Museum: This show inaugurates a new era for the gallery space and the permanent collection at UCSB, and it’s an entirely appropriate choice, as no one could be more of an embodiment of the interpenetration of art, design, and architecture than influential architect Cliff May. His popularization of the “indoor-outdoor” ideal of California living did more to shape the American home-scape of the 1950s and 1960s than any other figure, as literally thousands of communities all over the country erected ranch houses that were either inspired by or directly constructed from May’s drawings and blueprints. Through Sunday, June 17. Call 893-8000 or visit www.uam.ucsb.edu.