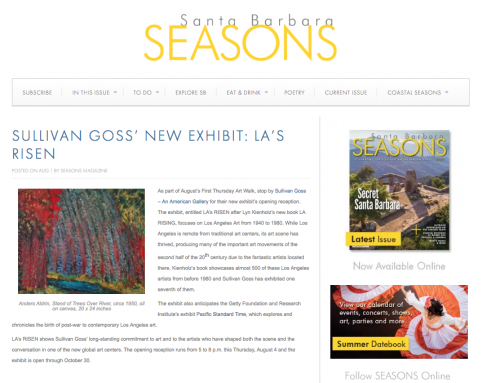 As part of August’s First Thursday Art Walk, stop by Sullivan Goss – An American Gallery for their new exhibit’s opening reception. The exhibit, entitled LA’s RISEN after Lyn Kienholz’s new book LA RISING, focuses on Los Angeles Art from 1940 to 1980. While Los Angeles is remote from traditional art centers, its art scene has thrived, producing many of the important art movements of the second half of the 20th century due to the fantastic artists located there. Kienholz’s book showcases almost 500 of these Los Angeles artists from before 1980 and Sullivan Goss has exhibited one seventh of them.

LA’s RISEN shows Sullivan Goss’ long-standing commitment to art and to the artists who have shaped both the scene and the conversation in one of the new global art centers. The opening reception runs from 5 to 8 p.m. this Thursday, August 4 and the exhibit is open through October 30.