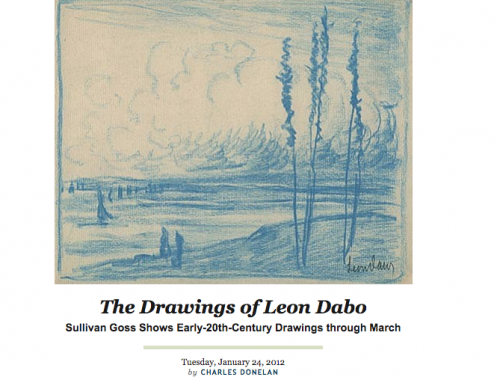 The dapper and enigmatic American artist Leon Dabo, best known as a tonalist painter of Hudson River Valley landscapes, was a protean figure whose extraordinarily varied output spans the better part of a century. He began his career as a muralist in the 1890s and progressed through periods of landscape painting, still-life painting, and drawing, the latter of which is the subject of this enchanting show. In fact, Dabo’s drawings may be the single best point of entry into his oeuvre, as they demonstrate his remarkable facility with a pencil and his characteristic strengths in design and composition.

Take for example the “Harbor Scene with Reflections New York City in the Background” of 1899. In very few lines, Dabo establishes his perfectly harmonized verticals, and then, in even fewer strokes, he re-creates them as shimmering reflections in the water below. Of course, the observation of objects and their watery reflections is a commonplace of the Impressionists, to name but one school that showed interest in this phenomenon, but in Dabo, two things stand out to separate his work from that of his precursors. First, there’s the characteristic leanness of the Dabo vertical. Whether it’s a tree, a flower, or the mast of a ship, he manages to find a way to indicate the heft and structural integrity of the object with an absolutely minimal stroke. Sometimes a single, brilliantly articulated vertical line stands in for an entire figure. Second, Dabo’s sense of composition typically takes maximum advantage of the properties of his media and materials. In this instance, we see the way his charcoal grips the grain of the paper and transmutes its emptiness into a source of light. Very few artists have his seemingly intuitive command of negative space. Technically speaking, he’s hard to top and demands to be seen by anyone interested in the raw power of the simplest lines.

Dabo also has a great story, which, while not necessary to the enjoyment of his work, certainly adds to the drama of his development. He was a decorated veteran of World War I and a refugee from Nazi-occupied Paris during World War II. Together with his Jewish second wife, Stephanie Ofenthal, and nearly 300 of his paintings, Dabo barely escaped Vichy France with his life. His still-life paintings of the war period tell a story that’s easily read, shifting ominously from the standard subjects of fresh flowers to more and more desolate tableaux.

The drawings on display now show Dabo at his most instructive and charismatic. In addition to being a great master of the elegant, attenuated vertical, he controls light and contour brilliantly, lifting fluffy clouds into place above the Hudson with only the faintest of touches from his crayon. He’s an awesome colorist, as well; the “Hudson River Landscape” of 1905 that was done in red-colored crayon on paper ripples with urgency, and the many studies executed all in blue feel like they belong together in a massive series, the long blue period of a cool tonal dude. According to the gallery staff, several young artists have already been in to make studies of the Dabo drawings, clearly hoping to pick up some new tricks from this subtle and deft exponent of “less is more.”